Salut,
Yesterday was our Abroadco excursion to Arles, a small town about an hour northwest of Aix. We all took the bus to meet our program director, Pam, in Arles, where she first treated us to a much-needed coffee/tea/hot chocolate to wake us up at a café on the main drag.

Since it was a Saturday, we got to see Arles’ very impressive morning market. I love the markets in Aix, but Arles’ market is more concentrated and I think even more extensive than Aix’s. It has everything: secondhand home furnishings and knickknacks (junk), clothing, art, pottery, and of course all manner of fruits, veggies, deli foods, baked goods, and prepared dishes. Pam took us on a quick walk through the market, warning us to keep our bags close in light of Arles’ infamous gypsy population. But we would come back to the market on our own later, we were really headed to the Arles cemetery, called the Alyscamps.

The Alyscamps was one of the most important burial grounds in the Roman Empire. In it were buried over 80 generations. When a ship was sent down the Rhone River with a coffin, it was assumed it’s destination was Arles. And when the man in charge of burials unloaded the coffin, he would find his payment of coins in the departed’s mouth. Over time, the cemetery deteriorated. When Vincent Van Gogh came to Arles and invited Paul Gauguin to paint the cemetery in 1888, it was a meeting place for young local girls and soldiers.

Les Alyscamps, Paul Gauguin; this is the canal, now dried up, that runs alongside the Alyscamps and three women dressed in traditional costume. The dome in the background is the church that was added to the site in the Middle Ages.

Les Alyscamps, Vincent Van Gogh; this pathway towards the medieval church is still there, lined with ancient, deteriorating sarcophagi. Here a woman in traditional dress meets a soldier friend.

Following the tour of the cemetery, we had some free time to explore the market. My friend Annie and I took a stroll up the food aisle and soon hit the regional sauces and spreads section. We suddenly had tiny pieces of bread bearing pesto, tapenade, caviar of eggplant, anchovy spread, and who knows what else pushed into our soon greasy fingers. Before this experience, I was still hoping that I might somehow appreciate the integral provençal spread that is tapenade despite my hatred for olives. Alas, not so, but I wasn’t about to refuse it from the eager-to-please and incredibly friendly vendors. I did like the ‘caviar of eggplant’ (surprised? me too). Moving on from the canned goods section, I bought half a kilo of strawberries that Annie and I shared in the park on the other side of the market.

After more wandering, we met Pam to go to our complimentary lunch. It was a nice restaurant with a generous 10€ formule for lunch. A lot of French restaurants have ‘formules’ for lunch and/or dinner that offer an entrée (remember, an appetizer not a main dish), a plat principal, wine, and coffee at a lower cost than they would all be ‘à la carte’ or separately. I got a copious green salad with a decent vinaigrette and an open face sandwich, called a tartine, with a decent tuna salad, or the French interpretation anyway. Think less mayonnaise, more celery. 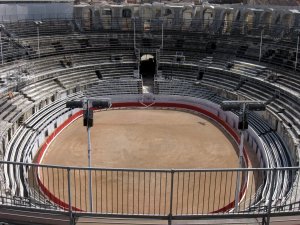 Pam whisked us off to see more Roman and Van Gogh sites after lunch. We walked along the Rhone River and past the building that used to be a brothel. One of its prostitutes created a vicious rivalry between Van Gogh and Gauguin. As everyone knows, Van Gogh cut off his own ear for this woman, delivering it to the brothel in what I’m sure was a very tasteful box. Then we saw the Roman amphitheatre, which could seat 20,000, be evacuated in minutes, and during the Middle Ages was converted into housing for 200 households. Today it is the site of Arles’ bullfights. Each year there is one bullfight in the Spanish style to open the season, but there are still provençal-style bullfights too, which sound very cool. The bull isn’t killed, just tormented by a team of pests, basically, who work together to distract the bull so team members can grab one of the ribbons pinned in between the bulls’ horns. I don’t think I’ll have the time to see one of these bullfights this trip, but maybe in the future. Pam said it’s almost like a ballet.

Right next to the amphitheatre is the Roman theatre, the remains of which aren’t that impressive but, like the other Roman sites in Arles, are still older than anything manmade I’d ever seen. Then we went to a Roman church. Also, an underground storage facility, or so anthropologists think, that might have been used to store wheat to feed Roman soldiers. Altogether, it’s the size of a football field and used to follow the course of the Roman forum above ground, of which only two columns remain. Also in Arles is the café that inspired the Van Gogh piece Café terrace at night (it’s the most expensive café in that particular square and also has the worst food..oh well). Finally, we visited the asylum where the painter was committed after the ear incident and once again after the town of Arles petitioned for him to be recommitted. Van Gogh wasn’t the most popular guy in Arles, apparently.

It was a busy day, but I’m glad we had Pam to show us around and, especially, tell us interesting stories about the sights. I don’t think I would necessarily recommend Arles as a must-see in Provence, though. I enjoyed it, but I also didn’t have to pay for lunch or entrance to the monuments, which generally seemed a little overpriced. Also, the Roman sites are interesting but, understandably, are a little rundown, so if the Roman Empire doesn’t interest you, it might be a bit of a letdown. I loved the market, though, and the town of Arles has done a great job of documenting Van Gogh’s points of inspiration there, posting reproductions of his paintings in their corresponding locations.

I want to write a little bit about Aix in spring, since it’s getting warmer and tourists are starting to come out. But this entry is already long enough, so check back soon. And here’s the link for my Facebook album of Arles for more photos of the amphitheatre, the Alyscamps, and the Rhone River. Also you can click on the pictures in this entry to see larger versions.