5. Their currency is seriously cool.

Although Prague is generally less expensive than other big-name European capital cities, it’s almost a shame to spend any money at all, unless it means discovering a banknote you haven’t yet seen!

The bills feature important figures in Czech history and culture.  At the time, I didn’t have the 5000 or 2000 notes, but they show, respectively, TG Masaryk, an incredible politician who, among many other accomplishments, defended a Jew in the Czech equivalent of the Dreyfus Affair, and Emma Destinova, one of the greatest opera singers of all time (and a woman…imagine!).  On the notes in the picture are a politician-historian; one of the most beloved Czech author(esse)s, Bozena Nemcova; a teacher, scientist, all-around smart guy; and Charles V, Holy Roman Emperor and the guy who gave Prague its most famous landmarks.

Finally, instead of stamping their coins with the floating heads of random presidents (seriously, Dwight Eisenhower?), Czech coins show awesome things like this:

Based on a sample size of two (my research methods professor told me that’s sufficient), Prague street musicians are better than the average subway station accordionist.  I walked across the Charles Bridge on two different days and saw two great bands.  One was kind of jazzy, a sax, clarinet, trumpet deal.  The other was a little more honkytonk (wonder how you say that in Czech?) and featured a tuba, washboard, and vocalist, plus these superstars:

And yes, that is a cigarette in the trumpet player’s left hand.  So, maybe try to get to Prague before this guy’s lung capacity drops too low.

3. Prague looks good, even in the rain, or covered in graffiti, or drizzled with bechamel sauce (probably).

Some cities just can’t stand up to bad weather or the slightest bit of dirt.  Prague has all the beauty of Paris, but you don’t feel like you’ve seen it all before in a movie or on a postcard.  Passing from the historical sections of Prague into places like the bustling, commercial Wenceslas Square, I noticed the increased use of neon signs and a few more McDonalds, but the buildings were still more charming than the average high-rise in an American city.  Plus, when in doubt, just paint it in a pastel shade of green, pink, or yellow.

Anyone who’s known me for awhile knows that several coincidences led me to start rooting for the Green Bay Packers back in the third grade.  In the same way, in the 8th grade, Bedrich Smetana’s ‘Moldau’ became the first piece of classical music I ever bought on CD.  And though I knew Smetana was from Bohemia, I wasn’t expecting the widespread worship he still receives in Prague and probably in the Czech Republic in general.

As I said, it was coincidence that led me to this particular piece of music; I haven’t been listening to Beethoven’s piano concertos since I was eight or anything like that.  Smetana is (I think) not as well-known in the US as his compatriot, Antonin Dvorak.  In Prague, he’s hailed as the father of Czech music,and I, for one, couldn’t be happier. 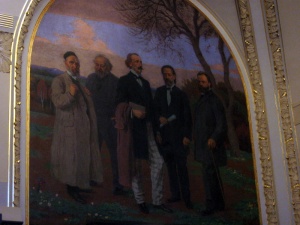 This is from the Prague Municipal House, or city hall, famous for its Art Nouveau styling. Smetana and Dvorak are the farthest to the right.

1. It’s good to be reminded how hard some peoples have fought for their cultural identity.

Excuse me while I go all polisci major for a sec, but it was inspiring to see how proud Czechs are of their culture and history.  Now, I’m regrettably ill-versed in Central and Eastern European history, but even I picked up on the pride Czechs have in their country and their capital city after years of fighting and protesting to claim their own identity.  It would be hard not to notice–you see it in their currency, their municipal buildings, their street names.

This open, yet somehow unassuming pride is really refreshing.  While I don’t believe the stereotype that all French people are snobs, I do sometimes think they consider it a foregone conclusion–to the extent that it’s not worth reiterating–that French philosophers, artists, and writers have been indispensable to the development of Western culture.  Americans are stereotyped as not letting you forget their country’s more recent role in this development.  Maybe both groups are right, but the sincerity with which Czechs celebrate their own heroes is distinct and, for lack of a better word, totally cool.